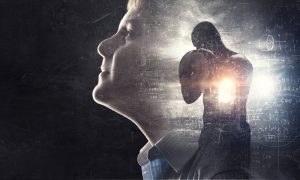 Two rising stars of amateur boxing spoke today about their excitement surrounding their forthcoming title fights at Nottingham’s Motorpoint Arena on Friday 29th September. Paul ‘the Meatball’ Thompson and Jack ‘the Machine’ Mantell will both take to the ring to battle it out for belts under the EBF (European Boxing Federation) banner.
Mantell, 25, is challenging for the EBF British Middleweight title, already the holder of the EBF English Super Middleweight title, and will be fighting Sam Godfrey from Derby for the title. He spoke of his enthusiasm for the fight, stating that he was “getting butterflies” and added that he was “buzzing for the fight, I have been training at the top level so I am ready to get in that ring”. Thompson, also 25, is challenging for the EBF Midlands area Super Welterweight title, and will be taking on Tim Sobers for the title. He spoke about his dedication to the fight, after falling in love with boxing during a stint in the military. Speaking of his opponent, he stated that he was “coming at him with everything I’ve got”.
Both boxers thanked their sponsor, DSR Tax Refunds, for the invaluable support in allowing them to train at their highest level. Thompson added that as well as the financial benefit, it made all the difference to be recognised as a talent worthy of support. DSR Tax Refunds founder, tax expert David Redfern spoke of his pride in the two promising boxers, adding that “their dedication to their sport is astounding and we are proud to sponsor two emerging talents, whose drive and ambition matches our own”.
Jack ‘the Machine’ Mantell and Paul ‘the Meatball’ Thompson will both take to the ring at the Nottingham Motorpoint Arena on Friday 29th September 2017.
For High Res images or media enquiries, please contact: David Redfern on 0330 122 9972 or email info@tax-refunds.co.uk
About
DSR Tax Refunds are tax preparation experts, based in Nottingham, UK, who specialise in helping clients win tax refunds on a no-refund, no-fee basis. Their specialist team can help workers and subcontractors with all relevant paperwork to ensure their claim is handled in an accurate and efficient manner.
About Jack Mantell
Jack Mantell is a 25-year-old Middleweight boxer from Nottingham, fighting under the EBF (European Boxing Federation) umbrella. He is sponsored by DSR Tax Refunds.

About Paul Thompson
Paul Thompson is a 25-year-old Super Welter-weight boxer from Nottingham, fighting under the EBF (European Boxing Federation) umbrella. He is sponsored by DSR Tax Refunds.

How To Maximise Your Tax Refund

Expert Guidance for New Entrepreneurs     As the UK economy recovers from the Covid19 pandemic, many people have been

Homeworkers: Can You Claim Capital Allowances?